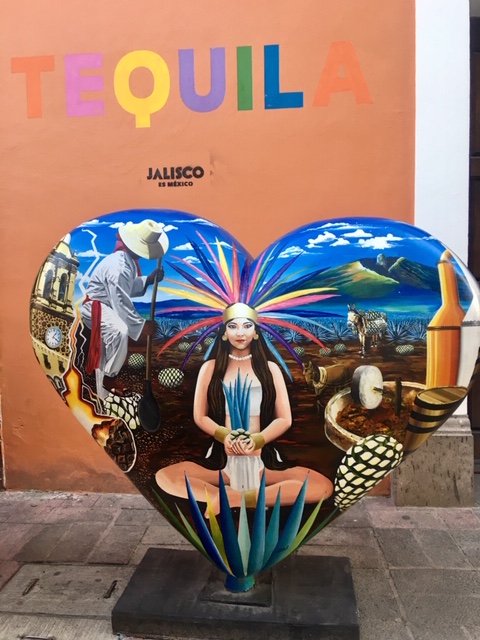 Any visitor to Puerto Vallarta walking on the Malecon soon learns that these tastings are anything but “free” … they are high-pressure “teasers” with the ultimate goal to get you to go a timeshare presentation. Did we want to learn about Mexico’s liquid treasure from a slick salesperson whose only goal is to guide unsuspecting tourists down a very bad investment path rather than from someone who had real knowledge of the art of tequila production? ¡Ni hablar! So ever the adventurers, we rented a car from Puerto Vallarta and set off for the Pueblo Mágico (magic town) of Tequila, the birthplace of the world-renowned liquor of the same name. (More on renting a car in a later post, this was also an adventure 🙂 Pueblos Mágicos are towns recognized by the Mexican government for their “magical” qualities, whether that be their astonishing beauty, rich history, or extraordinary legends.

Also wanting to explore the city of Guadalajara, we drove there first. Our first impression? Not that impressed. One thing that surprised us was the lack of restaurants and bars that we expected would be plentiful in the centro area we were staying in. They were far and few between. But later reflecting on this, Guadalajara is a Mexican city not catering to tourists as Puerto Vallarta does. We did find a few places and had some delicious food for very reasonable prices and discovered the Zona Joyero – the jewelry district with literally hundreds and probably thousands of silver and gold sellers armed with machine-gun-wielding officers (!). I bought three pairs of beautiful Italian silver earrings for a whopping total of $48 CDN. This score alone was worth the trip but we decided to cut that visit short and head to Tequila. I don’t think we were completely fair to Guadalajara on that short first visit though; it would take a lot more research and at least a second visit to properly get to know and judge the huge city. One thing we came away with is the fact that the traffic is horrendous and I am used to traffic in big cities. A local told us that the city is extremely ill-planned to handle all the traffic and bursting population. Tequila is just under 100 miles from Puerto Vallarta and less than an hour outside of Guadalajara. There are two highways: the 15D which is the Autopista, the toll highway, and the 15. We chose the Autopista on the way down which is faster and cost a total of 296 pesos ($20 CDN) from three tolls, so we decided to take the 15 Libre from Guadalajara to Tequila and were glad we did. This free route wound through the beautiful blue agave fields and past the haciendas – the grand and boutique distilleries – some of which date back to the 1600’s. We stopped near some agave plants and I tried to pull off a piece. Mistake! Those fronds are full of tiny needles like a cactus and I came away with many of them embedded in my hands, ouch! Learning that the agave plants are still harvested by hand by jimadors in a traditional way gives me mucho respect for everyone involved.

Tequila is recognized as a UNESCO World Heritage Site and the liquor is a Mexican designation of origin product in more than 40 countries. The only product that is more fiercely internationally protected is champagne by the government of France.

We planned to get to our hotel and get settled before exploring the distilleries. Upon driving into the town of Tequila, we were bombarded with people holding signs with a big E which stands for estacionamiento – parking. We hadn’t pre-reserved a hotel so we popped into a few near the main square that came with parking and chose the beautiful Colonial Casa Dulce Maria Hotel with a fascinating history. It cost a whopping $50 CDN per night. The hotel’s free parking was located 5 blocks away and this was an experience in itself. By the time we were able to venture into the town, it was after 4 pm and we were too late to take any distillery tours.

On the way in we had stopped at Don Roberto but learned that in order to tour a distillery, you had to take a tour from one of the tour companies that transport visitors in cheesy but fun tour vehicles. So this will be on the agenda for our next visit to Tequila, and we will be returning! We could see why Tequila is Mexico’s jewel Pueblo Mágico. Charming streets and buildings lead to a center square and cathedral. We even discovered several boutiques and a designer dress shop and sometimes felt like we were in Paris! Most stores, hotels, cafés or any kind of establishment no matter what they sell also offer tequila for sale. And blessedly, there are no time-share-disguised tequila tasting hawkers. You can’t get a tasting, just buy the drinks or a bottle of the best commercial and artisan tequilas.  But luck was with us as we had arrived on the last night of the XLIII Feria Nacional del Tequila 2019. The square was lined with tequila producers and we had shots all around the square. We got to taste some of the finest artisanal tequila and now have a new appreciation for this liquor. Now fueled with liquid gold and silver, we google searched for a restaurant. We wanted to get away from the square for awhile which was becoming very loud with booms going off and mariachi bands; the processions leading to the church were starting as part of the Festival of the Virgin of Guadalupe. This important religious and social holiday marks the anniversary of the day the Virgin Guadalupe made her miraculous appearance to a peasant in Mexico. Once again, we were shocked to discover that there really aren’t that many restaurants in this town and the few that are there were closed due to the celebrations. So back to the square we went to the main restaurant, Portales del Cielo and came away absolutely stuffed for $38 CDN (550 pesos). The complimentary bean dip was one of the best things we have ever eaten and we ordered more! Are there medical reasons to lift your shot glass and love tequila? Apparently so, read on! There are two categories of tequila as depicted in the photo below. 100% agave Tequila is obtained entirely from the distillation of webber agave pineapples while Tequila can have up to 49% of the total derived sugars and 51% or more of 100% agave distillate. In other words, other kinds of (usually bad) sugars are added such as corn syrups. So you want to make sure to buy 100% agave tequila. Okay, tequila is not a health food but what are some identified health benefits?

Explore this article for the scientific-backed claims.